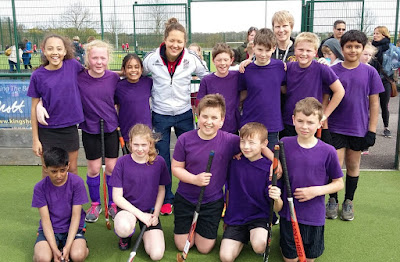 Cunningham Hill entered two teams into the St Albans and Harpenden Quicksticks Hockey Tournament on Thursday. Above you can see the squad pictured with GB international Ellie Watton. Forty one teams entered the tournament and the standard of hockey and competition was excellent. Both our teams performed brilliantly. Cunningham 2 just missed out on getting into the last sixteen by one goal. Cunningham 1 had an amazing run of victories,  which saw them through to the last sixteen, quarter finals and into the semi finals. Then, for the third year in a row, we just missed out on a place in the final on the "Golden Goal" rule. However, the team did not give up and went on to win the third and fourth place final 6-2. It was an exciting and tiring day, the behaviour and sportsmanship of our teams was superb and Mrs Beattie, Miss Green and the whole school are very proud of you all.
Posted by CHJS Blog at 03:12